To highlight the importance of AI to a broader public, the Amsterdam coalition ‘AI technology for people’ has published a special AI edition in the October issue of the popular science magazine New Scientist. The special edition showcases some of the research, teaching and innovation in AI being carried out across the Amsterdam region.

In 2019 seven Amsterdam knowledge institutes, including the University of Amsterdam, together with the City of Amsterdam and the Amsterdam Economic Board announced a joint initiative to invest 1 billion euros in the development of responsible AI technologies over the coming ten years. Known as AI technology for people, this partnership focuses on creating research programmes, attracting world-class researchers and equipping students with the latest knowledge of AI in the domains of business, health and citizens. 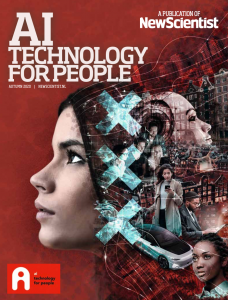 The special edition of New Scientist beautifully illustrates the innovative character of this partnership by showcasing diverse examples of how artificial intelligence is being developed and applied by the Amsterdam AI coalition. From interviews to features, project descriptions to editorial pieces: the special edition brings together teaching and research and highlights the role of business and government and, of course, the impact of AI technologies on our daily lives. A shared thread in all of the technological innovations currently being developed is the sharp focus on the social, ethical and legal aspects of artificial intelligence.

‘By jointly initiating projects, we are able to increase current knowledge about AI and its many applications much faster and more effectively’, says Geert ten Dam, president of the UvA Executive Board and one of the driving forces behind the Amsterdam AI coalition. ‘It is about an integrated approach throughout the entire chain, one in which people are central. A notable example is the CIVIC AI Lab, a collaborative endeavour between the UvA, Vrije Universiteit Amsterdam, the City of Amsterdam and the Dutch Ministry of the Interior and Kingdom Relations. All the partners in CIVIC AI Lab collaborate closely on AI technologies that fully uphold values such as equality and privacy and which contribute to equal opportunities for everyone.’

The partnership now extends far beyond the Amsterdam region. ‘With the collaborating knowledge institutes, the active involvement of the City of Amsterdam, the broad business community and 277 start-ups spread throughout the city, Amsterdam is a very attractive destination for innovative companies (big and small) and AI talent’, says Anita Nijboer, ambassador of AI technology for people. ‘We are actively linking this powerful ecosystem with other innovative ecosystems across the Netherlands. This collaboration is an essential part of our plan to position the Netherlands as a pioneering hotspot within the international AI landscape. The Amsterdam AI coalition, with its extensive knowledge and expertise in the field of AI, is ideally placed to lead this initiative. We are immensely pleased that the members of our Committee of Recommendation support this mission statement.’

The Committee of Recommendation comprises: